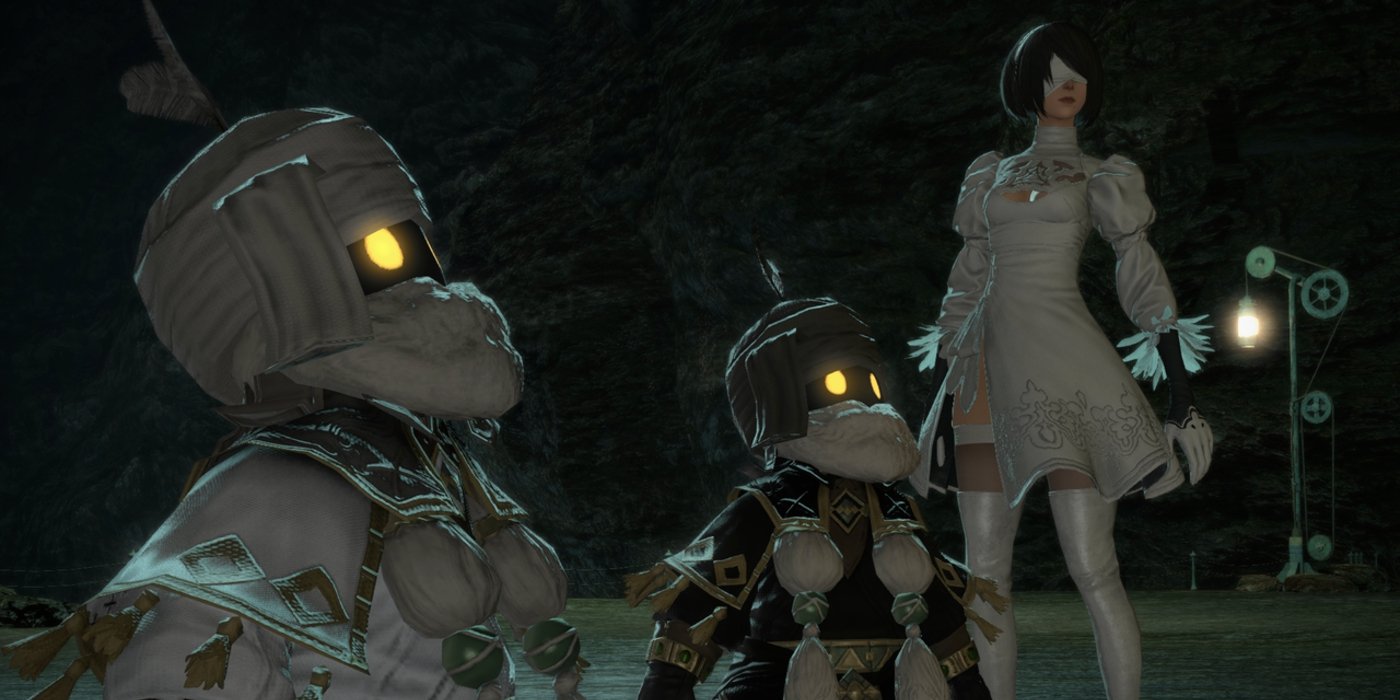 The unexpected crossover between Final Fantasy XIV and NieR: Automata came about through the strategic deployment of four bottles of wine, courtesy of XIV director Naoki Yoshida. When it first released back in 2010, Final Fantasy XIV was absolutely dragged by critics and audiences. However, after going back to the drawing board and listening to feedback, the 2.0 relaunch, 2013’s Final Fantasy XIV: A Realm Reborn, became an instant success, quickly becoming one of the most popular MMORPG titles on the market. Since then, subsequent updates and content drops have only made the game bigger, better, and more inviting to new players and returning veterans alike.

Alongside the Shadowbringers expansion in 2019 came YoRHa: Dark Apocalypse, a 24-person raid that brought Final Fantasy XIV to the world of NieR: Automata, a fellow Square Enix title from director Yoko Taro and producer Yosuke Saito. The NieR games spun off from the Drakengard franchise, but none of those titles held a fraction of Final Fantasy‘s popularity until Automata proved to be an unexpected sleeper hit, turning the series into one of Square Enix’s heavy hitters, practically overnight. The crossover with FFXIV is further evidence of NieR‘s importance to the company moving forward.

The recent 5.3 update for Final Fantasy XIV brings – among many other things – the second chapter of the YoRHa: Dark Apocalypse raid storyline, and to mark the occasion, Square Enix have released a behind-the-scenes YouTube video describing how the crossover came together. Featuring Naoki Yoshida, Yoko Taro (shrouded, as usual, by his floating head mask), and Yosuke Saito, the video explains that Yoshida was so keen to get NieR content into the game, he used a steak dinner and copious amounts of wine to make the NieR creatives more amenable to his wishes.

The way Yoshida explains it, he asked the NieR bosses out to dinner without context, and after two bottles each of red and white wine, asked them if they would be interested in working on something together. He concedes, “I pretty much bribed them to do it.” Jokingly, Yoko Taro comments, “We were very drunk at the time, so I don’t have any recollection of what happened.”

The rest of the interview goes into more detail about the process of coming up with the scenario and gameplay of the Dark Apocalypse event, but it’s also full of charming back-and-forth between the creative producers of some of Square Enix’s most treasured titles. Even with his refusal to fully appear on camera, Yoko Taro is a treasure trove of wisdom and self-deprecation, leaving little mystery as to why his games are so intelligent and entertaining across various levels of emotional and intellectual depth.