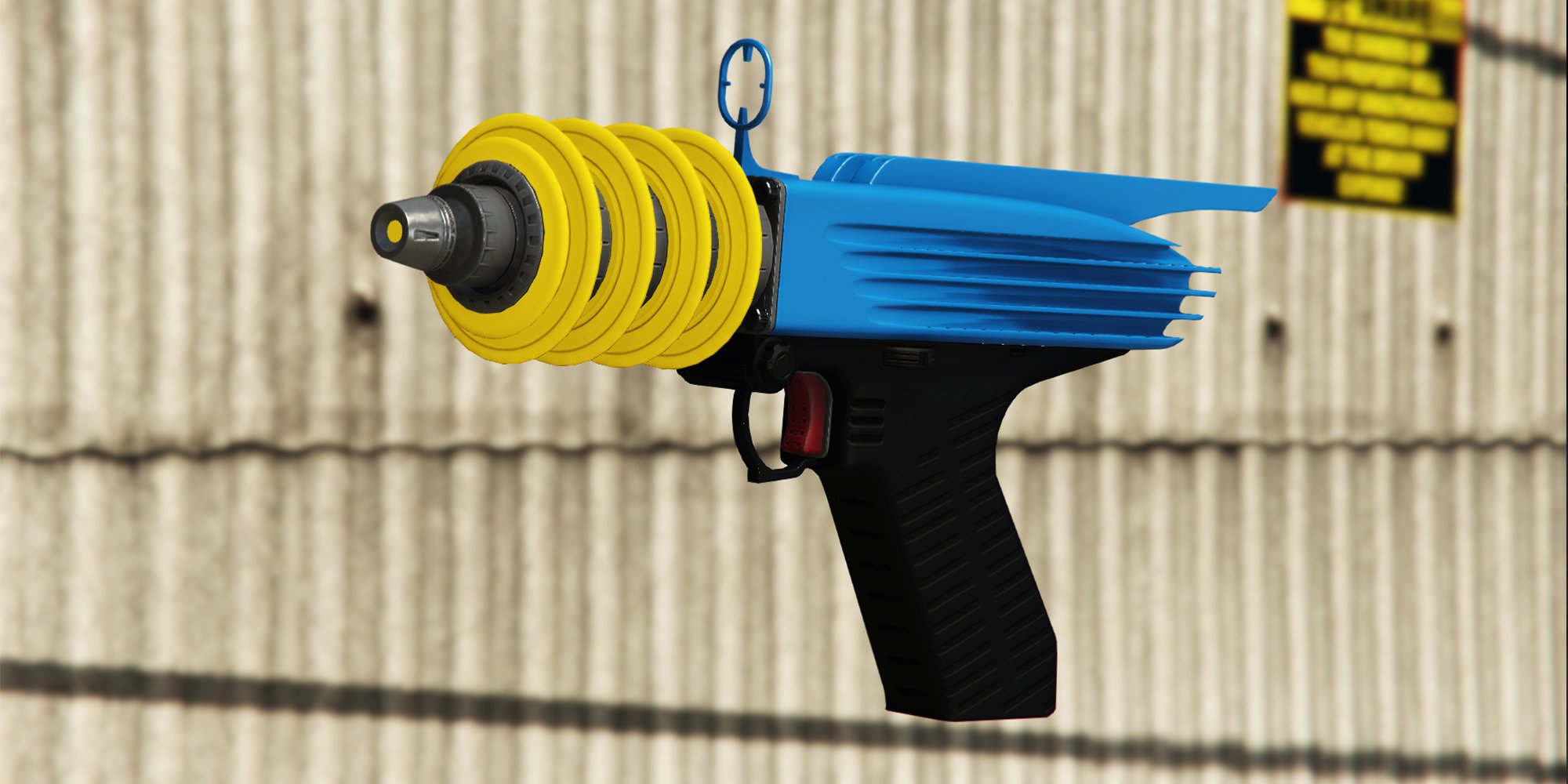 GTA Online breaks the fabrics of reality with the Up-N-Atomizer gun. This guide will help GTA Online players find the Up-N-Atomizer Gun and explain how to use it to its best effect. GTA Online has never feared to introduce some science fiction elements into the world of Los Santos. The entire basis of the game is about gaining money, fame, drugs, and power from the rest of the city while building up a fearful reputation as someone who should never be messed with. On the contrary to these dark themes, players can also find Bigfoot hidden around the forest and aliens flying their UFO above Los Santos in the offline mode. The point being, the series has never feared to take a step into the unknown. This shows both sides of the same coin, with one side maintaining a deep and serious story about retributions and redemption, while the other is all about being as weird and as fun as possible. The Grand Theft Auto series has always been able to balance this act perfectly and every time a new game in the franchise releases, there is a giant event around it. Grand Theft Auto 5 is one of the best selling games of the last console generation and continues to sell millions of copies due to being a timeless game that adds new content that becomes available in its online game mode. GTA Online continues to add new features, missions, and gameplay modes for players to interact with and explore. This doesn’t change with its weaponry and this guide will help players find the Up-N-Atomizer gun in GTA Online.

The Up-N-Atomizer gun is unlike any other weapon in the game. Most weapons in Grand Theft Auto are based on weapons from the real world. Players can get their snipers, shotguns, and assault rifles by playing through the game normally. The Up-N-Atomizer is a special Raygun that was included in the Arena War online update. It released during the Festive Surprise 2018 event as well. The Arena War missions were playable inside the Maze Bank Arena, where players would focus on setups with props, terrain, and stunts. These were all the game modes available in that update for players to enjoy.

The Up-N-Atomizer is a futuristic alien pistol that also came along with the Unholy Hellbringer, another futuristic light machine gun, and the Widowmaker, a futuristic minigun. When shot, a blue coil releases and pops into a small blue blast. It also has unlimited ammo, where it automatically fills after 2 seconds until it can be shot again. This guide will tell players on GTA Online where they can find the Up-N-Atomizer.

To find the Up-N-Atomizer, players can purchase this weapon for a hefty $399,000 price mark at Ammu-Nation. Surprisingly, there is not a side quest or mission the player has to accomplish beforehand so players can unlock this weapon. For players who are short on cash, they can quickly complete some heist missions, as these have the largest payouts in the game. Another method would be to purchase in-game money using real-life currency if the player is short on time. Once the player has the Up-N-Atomizer, this is how it works.

As mentioned, the Up-N-Atomizer has unlimited ammunition. Once a shot is shot out, it takes about 2 seconds before it can be shot again, although, this weapon does have a few limitations. For example, this weapon cannot be shot while inside a vehicle. It also is not nearly as powerful as plenty of explosive weapons in the game. When an NPC or a player is hit with the raygun, they will be sent flying into the air. This does a decent amount of damage but does not kill them (unless its a clean shot for the head), making this the perfect weapon to mess with your friends with. When a vehicle is shot, it sends it flying for a bit and does some damage to it. The situations recommended to use this weapon would be during one on one fights, as this can leave enemies disorientated and confused. Try to avoid using this weapon in group situations, since if the player misses one of the shots, they are left wide open to be punished. Choose your battles wisely when using the Up-N-Atomizer.

Another method to get the Up-N-Atomizer gun in GTA Online would have been logging on to the game on Christmas Day back in 2018. To celebrate the holidays, Rockstar, the developer behind GTA Online, released the Up-N-Atomizer gun for all the players who logged in specifically on this day. If the players missed this opportunity, the only other option would be purchasing it from Ammu-Nation. Players can also customize this gun into several different colors for a fee of $5250-$12500 depending on what color the player decided to go with. GTA Online has continued its growth throughout the years, releasing back in the previous Xbox 360 and PS3 generation of gaming. Now as we are on the brink of the Playstation 5 and the Xbox Series X consoles scheduled to release later this year, the conversation of the future of the Grand Theft Auto series continues to develop. Will Rockstar just port over GTA Online on to new hardware and keep the game alive through updates? Or is it finally time for the world to get their hands on Grand Theft Auto 6? The future of the franchise is unknown as Rockstar has also recently released Red Dead Redemption 2 and has continued to support that game long after launch. As for the present, the Grand Theft Auto series is still going strong with GTA Online. The most recent update introduced motorsport racing to the game and new racecars for players to take a spin around Los Santos. The series has a long history of being weird and out-of-the-ordinary and that is totally acceptable as the consumers have learned to love the Grand Theft Auto series for exactly what it is.

Sky Flores is a writer and game-player based out of New York City. His hobbies consist of creating content on YouTube and streaming videos games on Twitch. His YouTube channel has generated over 185,000 subscribers and 35 million total video views. He’s covered gaming topics throughout the generations.