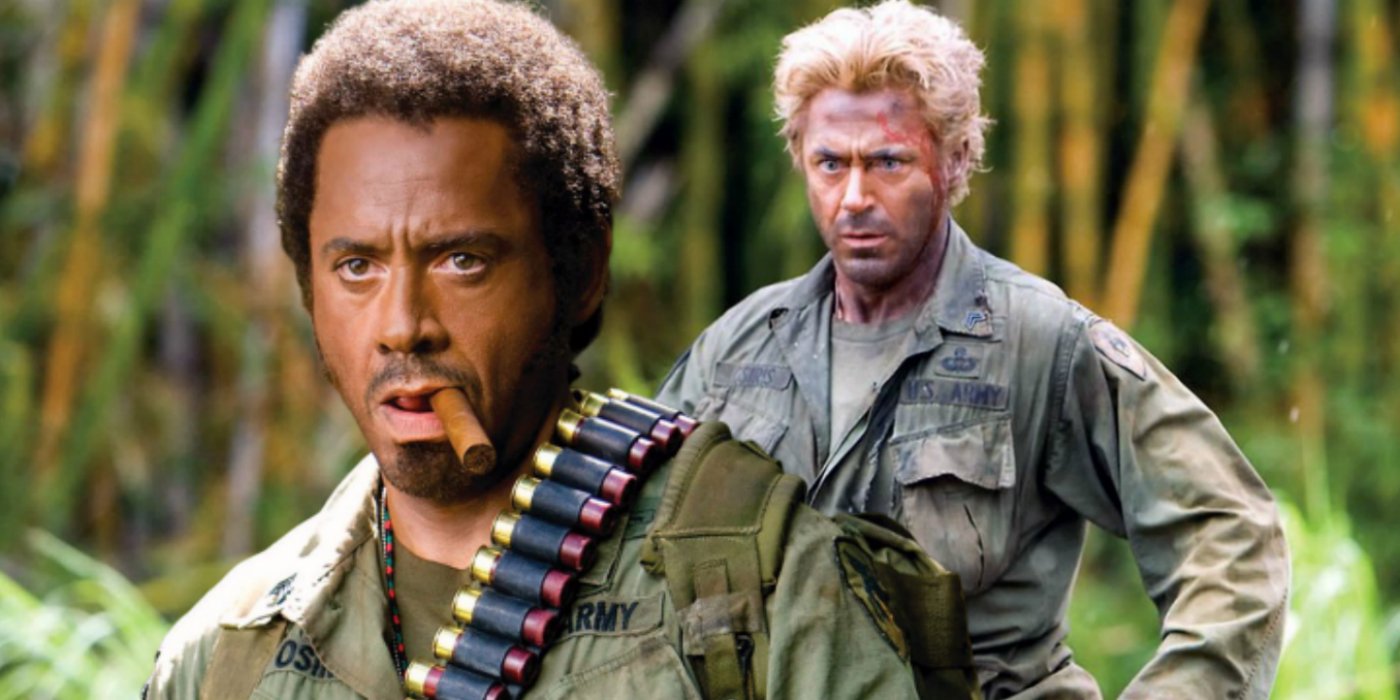 2008’s Tropic Thunder featured Robert Downey Jr.’s using blackface, yet surprisingly this didn’t receive a major backlash or cause any real controversy. Tropic Thunder is the movie within the movie that goes very wrong. Director Ben Stiller plays Tugg Speedman, a very Jean Claude Van Damme-esque character who was typecast as an action hero and is struggling to transition into more dramatic roles. His hopes at a career revival rest on the shoulders of Tropic Thunder, a war movie in which Tugg is playing the lead role.

Robert Downey Jr’s character is Kirk Lazarus, a five-time Oscar winning Australian method actor who is cast as African-American Staff Sargent Lincoln Osiris. Kirk undergoes a controversial “pigmentation alteration” procedure to darken his skin and, being method, he’s in the habit of never breaking character until after he’s done DVD commentary. While this could have led to a negative response to Tropic Thunder (the real movie), given blackface is usually associated with mocking black people, that didn’t happen in this instance. Robert Downey Jr. was even nominated for an Oscar for the role, and has continued to defend it since, and the lack of controversy is due to the movie’s satirical approach.

The brilliance of Tropic Thunder is that nothing is sacred. The film mocks everything “wrong” with Hollywood: product placement, drug use and addiction, problematic productions, megalomaniacal producers that are more interested in making money than telling stories, and the ludicrousness of Hollywood using serious subjects as money-making fodder. Downey Jr’s blackface is no different, as it is shown as part of the same ridiculousness of Hollywood, nor does it go unaddressed in the story. Alongside Ben Stiller and Downey Jr. is Brandon T. Jackson in the role of Alpa Chino, a rapper attempting to break into acting. He doesn’t let Kirk off the hook, and even claims that he’s making the movie to offer some “real representation.”

In addition, Kirk’s method acting ends up playing a pivotal role in Tropic Thunder‘s climax. After Tugg is kidnapped by the heroin producing Flaming Dragon gang and tortured and forced to perform his problematic film Simple Jack every night, Tugg has a crisis of identity that Kirk recognizes, having experienced it himself. In an attempt to help Tugg as himself rather than as his character, Kirk finally sheds his mask. It’s a hilarious and rather succinct way to also mock the sometimes inexplicable things method actors do, and viewers can’t help but laugh at how off-putting it becomes to hear an Australian accent come out of Robert Downey Jr‘s face.

If Tropic Thunder does one thing well it’s make audiences laugh, but its other goal was to provide some social commentary on the darker underbelly of Hollywood. By leaning into how ridiculous it is, and making the subject of the joke white actors and Hollywood as a whole rather than black people, it was able to avoid causing any real controversy. Tropic Thunder was ahead of its time here, since terms like “whitewashing” only reached prominence in the last decade, even though the practice has been around since the earliest days of Hollywood and continues to be controversial.

Next: The Iron Man 1 Scene That Has A Hidden Robert Downey Jr. Meaning

Yenny is a freelance contributor for Screen Rant currently residing on the East Coast. When she’s not writing about the latest film, game, television show, or comic book, she’s writing radio ads or updating her personal blog. Yenny is a self-professed nerd and professional sleeper.