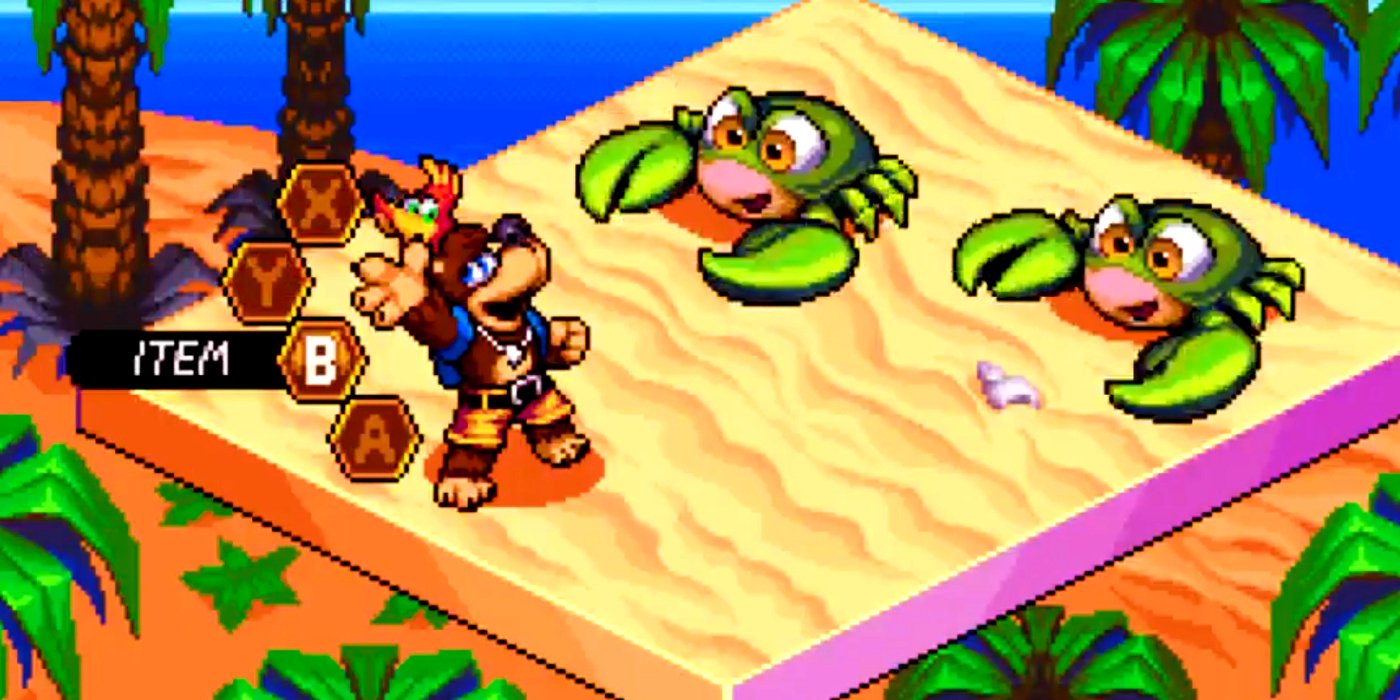 A recent 30-second clip reveals what Banjo-Kazooie might look like if Rare’s mascot character from the 1990’s got the same artistic treatment as Nintendo’s isometric classic, Super Mario RPG: Legend of the Seven Stars. As fans might harmlessly mistake this clip for legitimate gameplay, the independent studio consisting of many original developers of the Banjo-Kazooie series, Playtonic Games, denied the return of the beloved bird and bear. Playtonic Games was founded in 2014 by ex-Rare employees after Microsoft’s purchase of the studio in 2002, and have since created a spiritual successor to the N64 exclusive “collect-athon” in the form of 2017’s Yooka-Laylee.

Super Mario RPG: Legend of the Seven Stars was an ambitious and unconventional entry to the Super Mario franchise featuring isometric, pre-rendered graphics and turn-based combat which released in 1996 at the end of the SNES’s lifespan. Developed by Square (now known as Square Enix), Super Mario RPG is considered by some to be one of the best RPGs of all time. This robust and comedic adventure has an undeniably recognizable aesthetic, featuring character and environmental sprites similar to Donkey Kong Country and cute dioramas upon which combat sequences ensue.

Posted recently on Twitter and embedded below, this short video teases a concept of what Banjo-Kazooie might look like if Square got their hands on the series in the mid ’90s. However, the graphical style of the concept appears in pixel art rather than the more jarring, pre-rendered 3D visuals of the inspiration. The fan-made clip showcases an enemy called “Snippet the Crab” found in Treasure Trove Cove, the second world of the original Banjo-Kazooie. Typical JRPG style gameplay displays the player selecting an action from a menu and waiting until the attack animations play out and the opposing NPC takes its turn. After Kazooie shows off her special attack, which references some iconic egg firing, the last fiend is defeated. The artist then teases a boss encounter with “Nipper,” a giant hermit crab and reference to an actual boss battle in the aforementioned game world. Check it out below:

Fans have not received another entry featuring the fuzzy bear and his feathery friend since 2008’s third and final console installment, Banjo-Kazooie: Nuts & Bolts. The duo’s swan song saw a shift from the established formula, one which instead focused on a vehicle that players built upon and operated to complete challenges. The game received mixed reviews, with the majority of negative reception coming from players dissatisfied with the unexpected gameplay move away from world progression through character abilities.

Other than an HD repackaging of the three console titles in 2015’s Rare Replay and a well-deserved cameo in Super Smash Bros. Ultimate, there has yet to be word on another Banjo-Kazooie game, and the members of the original development team (now at Playtonic games) have stated “That ball isn’t in our court.” This pixel art tribute to the beloved franchise many millennials grew up with is a perfect treat to tease the imagination on what a Square-developed take on a beloved 3D platformer might look like. Hopefully some indie developers will take the ball and run with it.

Next: Yooka-Laylee & The Impossible Lair Definitely Isn’t Easy (But It Is Fun)

Benjamin Lewin is new to the journalism sphere but brings with him immense passion for video games and technology. Being a game developer, historian, and enthusiast, Benjamin owns over thirty video game consoles and over a thousand games. He arrives on the scene leveraging his creative writing skills from personal, fiction projects as well as script-writing from ten years of experience in film and video production. He loves everything from German culture, being nearly fluent in the language, to the demoscene.