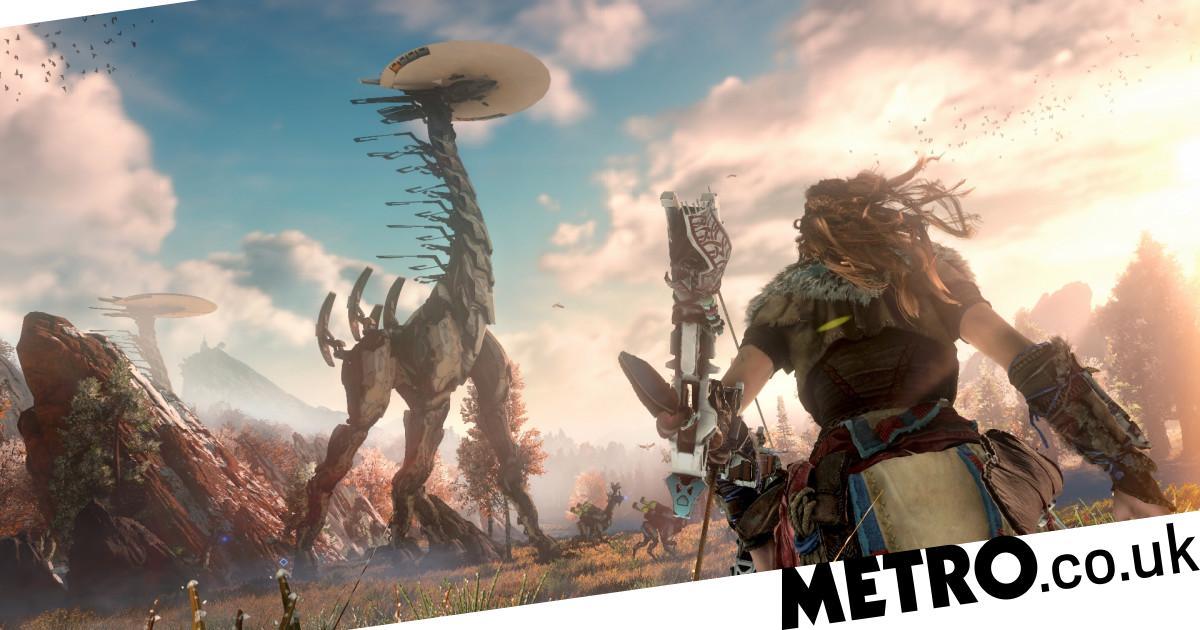 The Wednesday Inbox discovers what virtual reality looked like in the 90s on Tomorrow’s World, as one reader discovers Journey.

To join in with the discussions yourself email [email protected]

Popular formula
I’ve really enjoyed the Sony formula exclusives this gen. Roughly, I think that formula means a third person action adventure that riffs off Naughty Dog and Ubisoft world maps. God Of War, Horizon Zero Dawn, and Marvel’s Spider-Man have all highly entertained me, not got around to Days Gone yet. But I do agree with the criticism that the many of the elements that make up their totality are average and the games are greater than the sum of their parts.

Horizon’s main story was really good and played out excitingly and the robot dinosaur fights were fun as hell. But the combat isn’t that nuanced and upgrading was pretty standard. The world was beautiful to look at but was shallow with dull, uninspired side-questing and a barrage of collectibles. God Of War fared better with more nuanced combat and side quests but they were still below any kind of industry high water mark. The role-playing game upgrade element was a mess, enemy variety and bosses was a big weakness. Spider-Man nailed the movement of swinging around as Spider-Man but probably felt the most generic of all the Sony formula games.

Horizon Zero Dawn is probably the first of those games to get a sequel and I will want to see some evolution. All those games had great main story campaigns, but the wider world and mechanics were average to good but never outstanding. I guess what would be nice is if they had Zelda: Breath Of The Wild level world interaction and CD Projekt Red level side-questing. Bit much to ask but the Sony formula games do have to up the ante a bit next gen for me.
Simundo

A new future
RE: Final Fantasy 7 Remake. I personally think the wait was worth it. No, it’s not the whole game but I knew that as it was widely reported years in advance, although that hasn’t stopped people moaning about it. No, it’s not completely like the original but it’s a remake so I wasn’t expecting it to be. But yes, it’s an enjoyable game. I don’t think Square Enix were ever going to please everybody but they have updated it with several big nods towards the original. I’m glad it wasn’t completely turn-based and the combat system is brilliant in my opinion.

The ending excites me as they now have a free reign to go in different directions, although I hope they keep the original story in mind. THAT death is obviously a big topic and maybe it will change but, hand on heart, I hope it doesn’t. It was such a big part of the story and it would be a shame to change it.

I enjoyed playing it and am trying to platinum it now but uni work is getting in the way!
Chris

Sounds familiar
Wondering if you or your glorious readers could help me remember a game I played from waaay back in the mid-90s on the PlayStation 1. You played either a male or female cop sent in to investigate a mansion full of zombies and other monsters.

It had a kind of third person camera angle but with fixed backgrounds, if I remember correctly. I also recall boss fights against a huge snake, and maybe a gigantic spider and a shark at one point. Sorry if that’s not much to go on, but hopefully someone will know it. Cheers!
Fiddlesticks

GC: We’d say maybe Doctor Hauzer, but that was only on 3DO?

Two hours later…
Well that’s Journey finished. An ephemeral yet thoroughly enchanting experience it was. The game very much felt like a celebration of movement, discovery, and non-verbal communication and companionship to me.

The platforming/traversal physics are so tactile and graceful, making the simple act of movement feel joyous. The level design and environments are varied, striking to look at, and fun to navigate. The music, art and cinematography effortlessly achieve the desired effect, and the shared world concept is wonderfully implemented.

I now see why this unique game was many gamers’ choice for the game of 2012, and its respective gen. It’s bold, it’s bountifully beautiful, its ethereal atmosphere and minimalist design, similarly to Ico and Shadow Of The Colussus, is a breath of fresh air.

It’s a journey full of mystery and meaningfulness that will be occupying my mind for many years to come.
Galvanized Gamer

Putting the brakes on
So yes, it looks like my Switch has become a brick for the time being, and I’m gonna have to send it off for repair. Thanks for the info. Yes, it seems the connection issues are similar to the widespread issue that affected early Switches. Although I’ve never heard of the console not charging, which is now what’s happened to mine. I’ve had it 18 months, which means I think it’s out of warranty. (Although I’m sure the EU have some kind of consumer rights for such products that last two years?)

Anyway, it couldn’t have come at a worse time, just as I was able to invest some real time playing games, what with being stuck at home. Ah well, I’ll have to give my Wii U a dust off and finish some games I never completed. First off, Mario Kart 8 – my god the 200cc cups are hard! You have to actually use the brake to place anywhere. Yes, Mario Kart has a brake button! So if anyone fancies an online race just send me an invite.
SteJFin (NN ID)

The future of the past
I saw this video on YouTube of VR in the 90s on Tomorrow’s World. I had a go on one of these in the 90s in a local arcade. Only problem when I used it was I did not know how to put the headset on correctly, as it was loose on my small head and in this Tomorrow’s World video it shows you how to put it on. The other problem was I had to sit on the edge of the seat in the VR coin-op because somebody had left crisps and a crisp packet on the seat and they had also spilled a drink!

The one I played was a World War I biplane game for about a £1 or £2! I only had one go because it was rubbish because of said reasons above. I didn’t have the Internet then to know how to use it and there was no attendees to show you how to. I have got a PlayStation VR now, which is much better and I have played Astro Bot, Moss, and Batman: Arkham VR on it, which are all very good.

I am going to do some VR gaming while having to social isolate, so I can leave the flat without leaving it, if you know what I mean. I am interested to see what PSVR 2 introduces with the PlayStation 5.
Andrew J.

Digital board
RE: James. Lots of board games now have apps, and there are plenty of websites with recommendations if you have a search online. My personal favourites for playing with friends are Ticket To Ride, Through The Ages, Castles Of Burgundy, Isle Of Skye, Patchwork, and Lords Of Waterdeep.

Most of the apps have tutorials if you’re not familiar with the game, and YouTube channels like Watch it Played and Jon Gets Games feature tutorials for most of these games as well.
drlowdon

Perfect timing
It’s great reading about how successful Animal Crossing: New Horizons has been and I think it’s fully deserved.

It’s exceeded all my expectations and I’m enjoying it a lot, lot more than I thought I would, where I don’t just play it to relax, I’m thinking about what I’m going to do even when I’m not playing it.

The music, the graphics, the art style, the sound effects are fantastic and combined together create a beautiful, charming and fun atmosphere. I’m really looking forward to the update and it’s great that it’s free.

I think it could even be a game of the year contender, at the end of 2020, when hopefully things have returned to normal. We’ll look back at the lockdown and how Animal Crossing was the perfect game that came at the perfect time.

There’s just something about Nintendo games that no one else can match or recreate. I’ve started playing Splatoon 2 again, which still feels so fresh and different; I’m going to get the Octo Expansion soon.

I’m also looking forward to the Super Mario Maker 2 update and I’m still playing Zelda: Breath Of The Wild despite buying it as a launch title way back in 2017.

For me this lock down would be a lot harder without Nintendo.
wasimr34

Inbox also-rans
Will you be reviewing XCOM: Chimera Squad this week? I am hoping for a console release later this year. The announcement was a surprise to be sure, but a welcome one. Keep up the great work.
Eyetunes

GC: Yes chancellor. We couldn’t say which day though.

Couriers Of Darkness is the funniest name for a serious game I’ve ever heard. Does the word mean something different in America or something?
Croby

GC: The developer is Austrian, so maybe it’s a translation thing.

This week’s Hot Topic
The question for this weekend’s Inbox was suggested by reader Iceman, who asks what game have you played the most so far this year?

Regardless of when it was first released, what game have you racked up the most hours on so far and why? Is it something to do with the coronavirus lockdown or would you have played it that much anyway?

Is it just because it’s a long game or perhaps because it’s an online title that encourages you to play regularly? Or maybe you just haven’t played that many games this year and it wins by default? How does the game fit with your usual tastes and has it influenced you to play any other related titles?

The small print
New Inbox updates appear every weekday morning, with special Hot Topic Inboxes at the weekend. Readers’ letters are used on merit and may be edited for length.

You can also submit your own 500 to 600-word Reader’s Feature at any time, which if used will be shown in the next available weekend slot.